The Basics of Fibre Technology 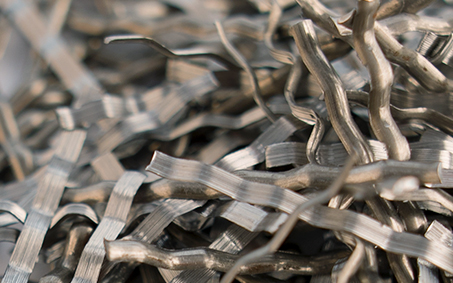 Why is tensile strength of concrete important?

Concrete is relatively brittle, and its tensile strength is typically only about one tenths of its compressive strength. The brittle nature of concrete is not conducive to the bending stresses attributed to concrete beams and slabs. To overcome the brittleness reinforcement is added.

A fibre intended to be used for reinforcement in concrete is generally a slender and elongated material at a length at least 100 times it diameter (ACI CT-18). Fibres are normally mixed into the concrete mixture at the tail end of mixing until universal dispersion of the fibres in the concreted is reached; this is normally accomplished with 70 revolutions of concrete mixing. Compared to plain concrete, fibre- reinforced concrete is much tougher and more resistant to impact.

How does fibre increases the tensile strength?

As the applied load on the concrete structure transmits through the backbone of concrete strength, tensile forces that would cause atomic dislocations, cleavage, and brittle-like fast fracture; are absorbed by the fibres in the concrete. These fibres provide tensile resistance that would otherwise cause concrete failure.

How the fibre works with the concrete — interface

A fibre for concrete reinforcing is designed to mechanically bond with the cementitious glue that binds the composite of concrete. Once mixed and bonded, the concrete fibre effectively absorbs the stresses that would cause the concrete to catastrophically fail from tensile loads.